DIY is really MIY or SIY 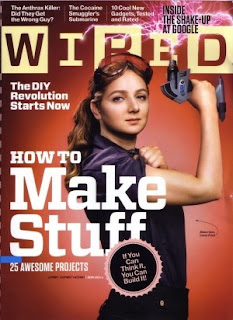 This is the cover of Wired's April issue. A woman holds up a power tool next to the headline which reads "How to Make Stuff." The subheadings include "The DIY Revolution Starts Now" and "If You Can Think It, You Can Build It." In the tech world, DIY is about taking the initiative to build and fix your own appliances, furniture, and various other doodads. It's about having a hands-on relationship with the world around you and an inner understanding of how it all works.

By this logic, you would assume that a DIY hero in the music world would be someone like Todd Rundgren, who, on top of writing all his own songs and playing multiple instruments, is also a wizard at the mixing board. And, of course, you would be wrong. Among musicians, having the DIY spirit means not relying on others to promote or distribute one's music. It has nothing to do with how the music itself is created. If anything is being built, it is a band's reputation and career.

So the term DIY is rather vague, as it is used to recognise two completely different skill sets and mentalities. I propose that it be retired, and replaced with the terms MIY and SIY, standing for Make It Yourself and Sell It Yourself, respectively.

Update, September 23, 2011: I wrote this post rather hastily, so I'll clarify a few points.

I'm really only addressing the music community here. There is a subset of musicians out there who produce their own music, program their own synthesizer patches, and tinker with Arduino boards. Like the participants of the DIY revolution championed by Wired magazine, they're driven by a desire to have a hands-on relationship with, and an inner understanding of, their chosen craft. But there's no term unifying them as a movement with a common sense of purpose, because the term "DIY" is already reserved by musicians to revere those driven to promote and distribute their own music.

And this is weird, because in the real world, it's quite the opposite, isn't it? The musicians who salivate over Arduinos would be the ones considered DIY, while there really isn't a term to describe the self-promoting type, who would be neither admired nor despised for doing things like putting up their own show flyers and building an online fanbase. Let's face it, we've all sent out resumes ourselves, we've all rehearsed an elevator spiel at some point in our lives. People do what they have to do to get ahead, and as long as their actions aren't intrinsically altruistic or evil, then such actions by themselves don't merit any sort of value judgment. We all understand this.

So it's easy to recognise just how misplaced the music scene's priorities are, for anyone who actually takes the time to consider them. This hurts music in the long run, but it doesn't have to be that way. Let's just call the former group MIYers and the latter group SIYers. By distinguishing the two different tendencies and giving each the most accurate description possible, we can bring the values of the music scene closer in line with those of the real world, while ensuring that neither group gets thrown under the bus.
Posted by Bennett Samuel Lin at 11:48 AM No comments: